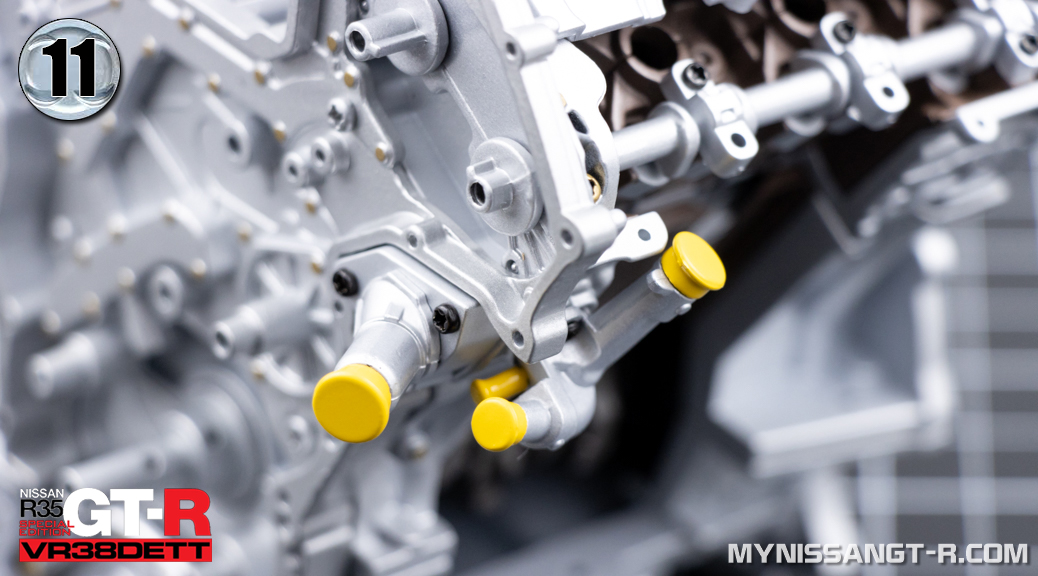 “With [Engine] Pack 11, you will attach the Rocker Covers and various other parts to your NISSAN GT-R (R35) Engine.” Fit the pin and post of the Connector B Part to the matching holes of Connector B, as shown: Secure these parts together from the other side with one (1) DP screw: Fit the tab of Seal Cap C into the notch of Connector A as shown, and secure these together with one (1) BP screw: As in previous packs, I painted the ‘bolt heads’ of the parts in this pack with my Metallic Gold Sharpie. I also used my Black Sharpie to paint the small ‘nub’ on the Right Rocker Cover Top just for some contrast and make the engine more interesting: Secure these parts together from below with two (2) BP screws: Retrieve your engine from the previous pack. Fit the Left Rear Camshaft Cover to the top rear of the Left Cylinder Head, aligning the locating pin and screw holes as shown: I painted the heads of these screws with the same Metallic Gold Sharpie to match the color of my bolt heads. This is also your friendly reminder to try using 3-in-One Oil on all screws going into metal: In the same way, fit the Right Rear Camshaft Cover to the top rear of the Right Cylinder Head, aligning the locating pin and screw holes as shown: Fit the Right Rocker Cover assembly from Step 03 to the top of the Right Cylinder Head, as shown: In the same way, fit the Left Rocker Cover to the top of the Left Cylinder Head, as shown: Fit the Connector B assembly from Step 01 to this location on the front of the engine, as shown.

I originally thought this part was a variable valve timing motor, so I painted the end of it black. However, I was wrong and this will be covered with a Seal Cap at the end of the pack, so the paint was unnecessary: Secure the Connector B assembly into place with two (2) TM screws: Fit the Connector A assembly from Step 02 to this location on the front left-side of the engine, and secure it into place with two (2) MM screws: Finally, push the Seal Cap A, Seal Cap B, and Seal Cap D onto the matching pins of each of these Connectors, as shown.

These Seal Caps are all different sized, so they will only fit snugly onto the appropriate Connector: I do enjoy that much of the piping is covered by caps just like a ‘crate’ engine would be! And, now we know why the right-side Camshafts are not full-length – they were covered up by the Rocker Cover.