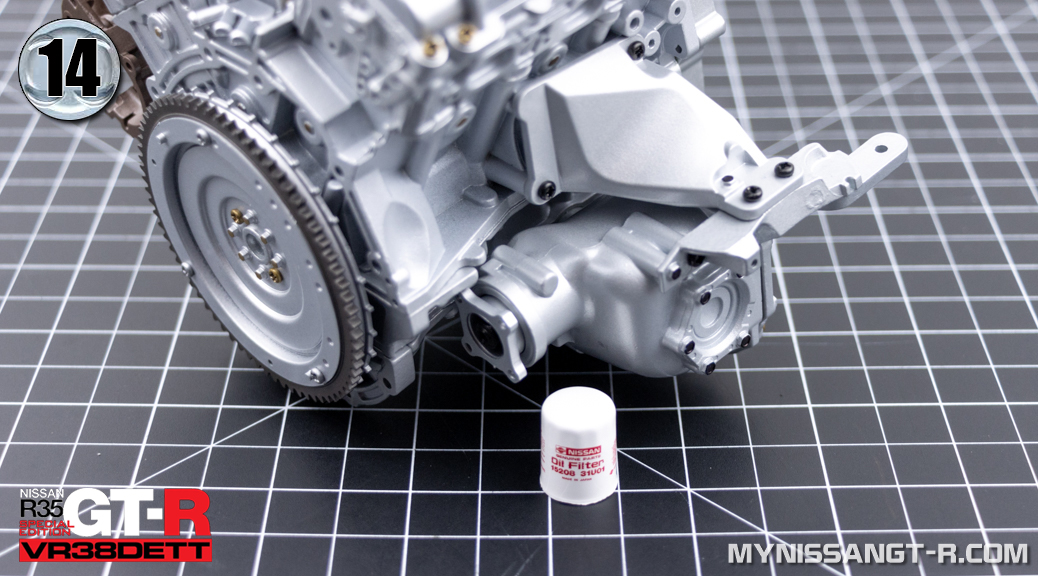 “With [Engine] Pack 14, you will attach the Flywheel to the NISSAN GT-R (R35) Engine parts you have built so far.” This Ring Gear Back Plate is actually a reluctor ring. The widely spaced teeth rotate past a sensor and tell the engine computer the position of the Crankshaft. If you look closely, you can even see that two of the teeth are missing. This is by design and very accurate to the real engine: Secure this entire Flywheel assembly together with three (3) MP screws.

As I have been doing all along, to make these MP screws blend in a bit, I used my Metallic Silver Sharpie on them. I also painted the ‘bolt heads’ (and the heads of the screws that will secure it) at the center of this Flywheel with my Metallic Gold Sharpie: Retrieve your engine from the previous pack. Fit this Flywheel assembly to the Rear Bearing Crankshaft, aligning the screw holes as shown: Secure the Flywheel assembly into place with two (2) MM screws. Fit this Right Support assembly to the right side of the engine above the Differential, aligning the screw holes as shown: As you fit this, note there is a locating pin that needs to slide into an alignment hole at this location on the engine: Begin securing the Right Support to the Cylinder Block with two (2) LM screws: Finish securing the Right Support to the Differential with one (1) HM screw.

To match the black screw head, I painted the nearby ‘bolt head’ with my Black Sharpie: I have to admit the Flywheel is more detailed than I expected! And, with the leverage it provides us, we can now quite easily turn the Crankshaft and see the Pistons doing their thing! Near the end of the build, we will be adding a front Crankshaft Pulley to the engine which will be the preferred method of turning the engine over. Keep the unused Oil Filter safe until we install it in Engine Pack 16.