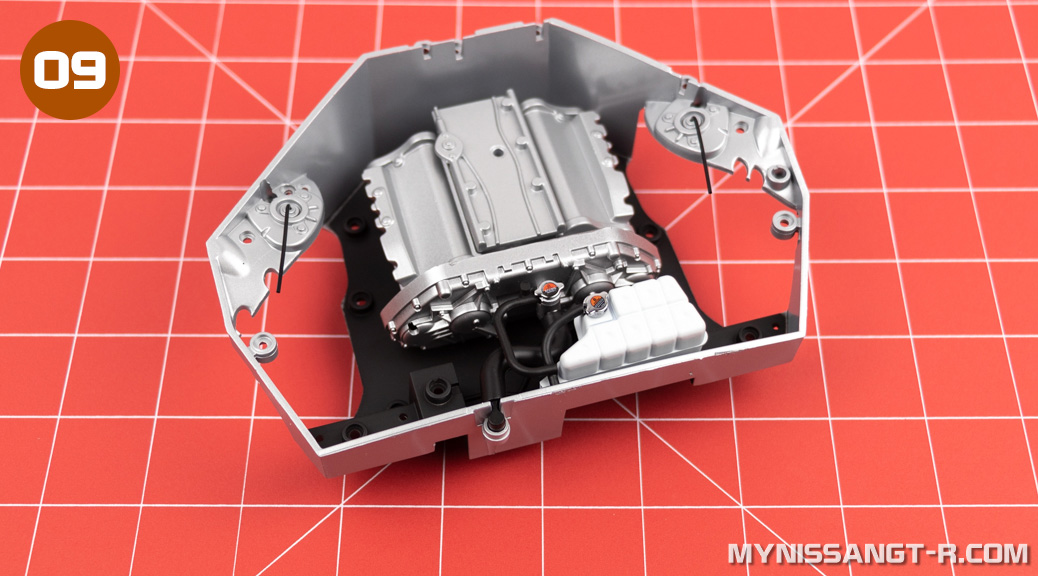 “Now let’s fit the Radiator Pipe and Cover, the Engine Hose, the Engine Front Cover and Base, and the Water Tank and its Cover to the Engine Room Bay that you received with [Pack 06].”

The Radiator Base with Pattern will not be used in this pack. Keep it safe for now, along with any extra screws. The Water Tank Cover has a shorter peg on it than the Radiator Pipe Cover. Also, notice this tab on it (circled below): Place this ring of the Engine Hose over the hole of the Water Tank, taking note of the notch in the ring (circled below): Press the Water Tank Cover through the ring of the Engine Hose and into the Water Tank, aligning the tab on the cover with the notch in the ring, as shown: Secure the cover in place from underneath with one (1) BP screw: Secure this from underneath with one (1) BP screw: Press the hose and the pin into place: Secure the larger Radiator Pipe behind the Engine Front Cover with one (1) HP screw: …and at the same time, slide the free end of the Radiator Pipe into this groove of the Engine Room Bay: Flip the bay over and secure all of these parts into place with five (5) HP screws, as shown: This Radiator Base with Pattern is not used, so store it for now: At least this issue had some more things to do! Keep this Engine Bay assembly (and the used Radiator Base) somewhere safe as they won’t be used for a while. Everything in this issue is plastic.