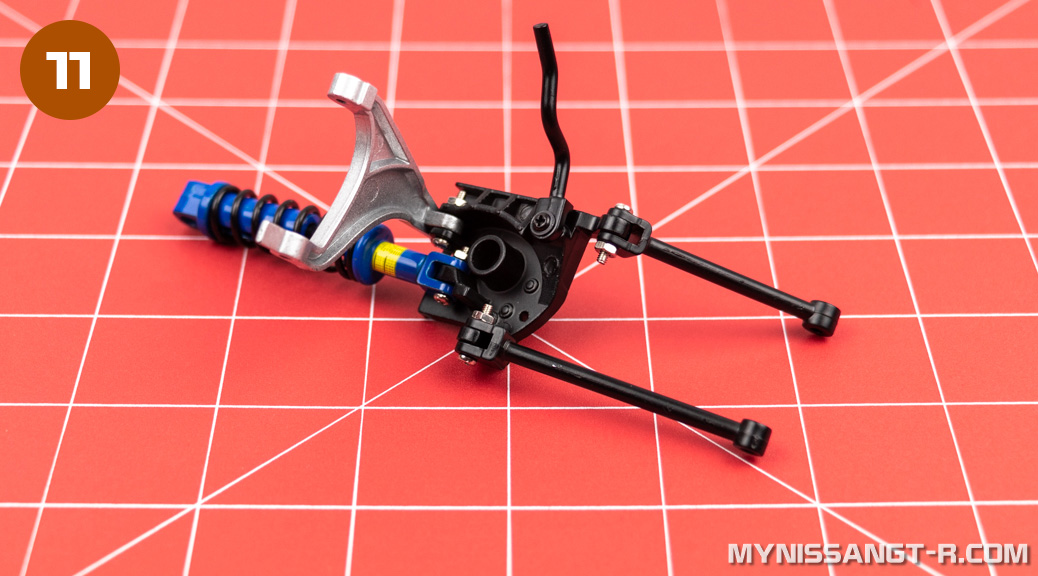 “In this magazine, you will assemble the Rear Left Suspension of your NISSAN GT-R (R35). The instructions are similar to the ones you followed when building the Right Rear Suspension in [Pack 04], but this time there is no Anti Roll Bar.” 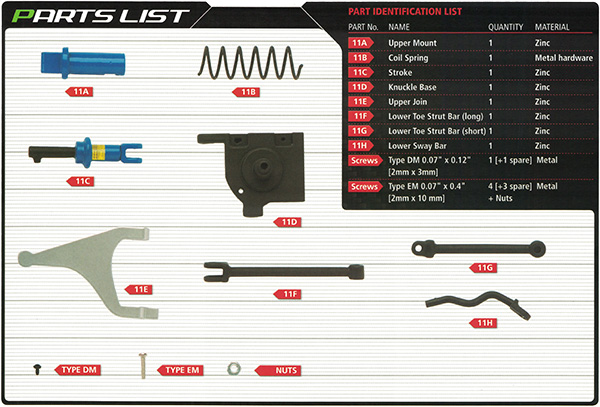 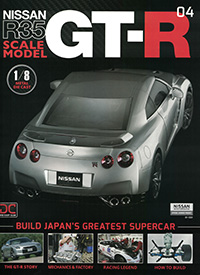 The design of this shock absorber is quite unique. The Stroke has a little tab that slides into a track in the Upper Mount. Once it is far enough along the track, it can be rotated counterclockwise which locks it into the Upper Mount. This picture (without the Coil Spring) may explain better: 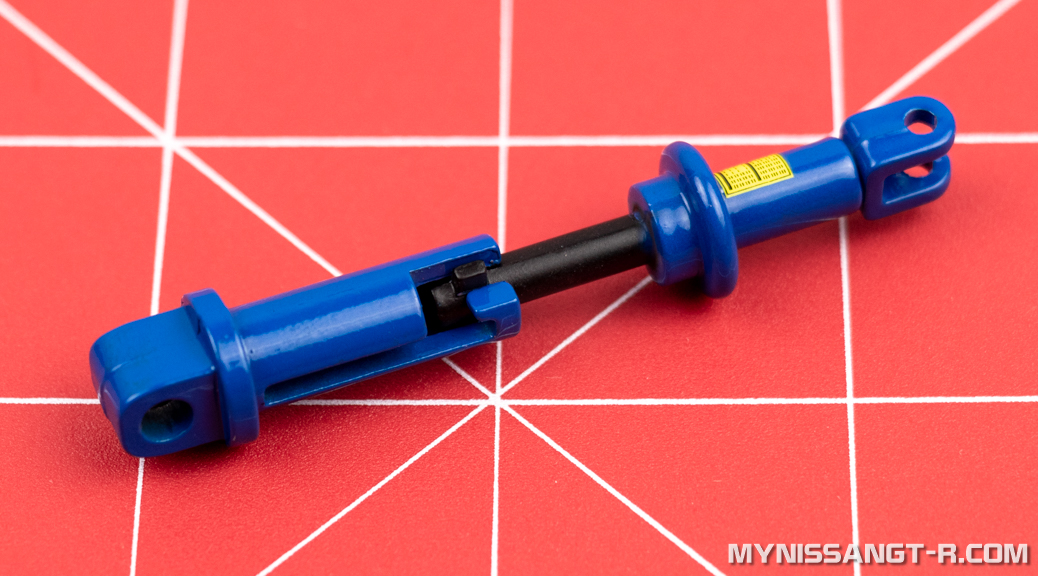 And now, with the Coil Spring installed and the Stroke locked in place: 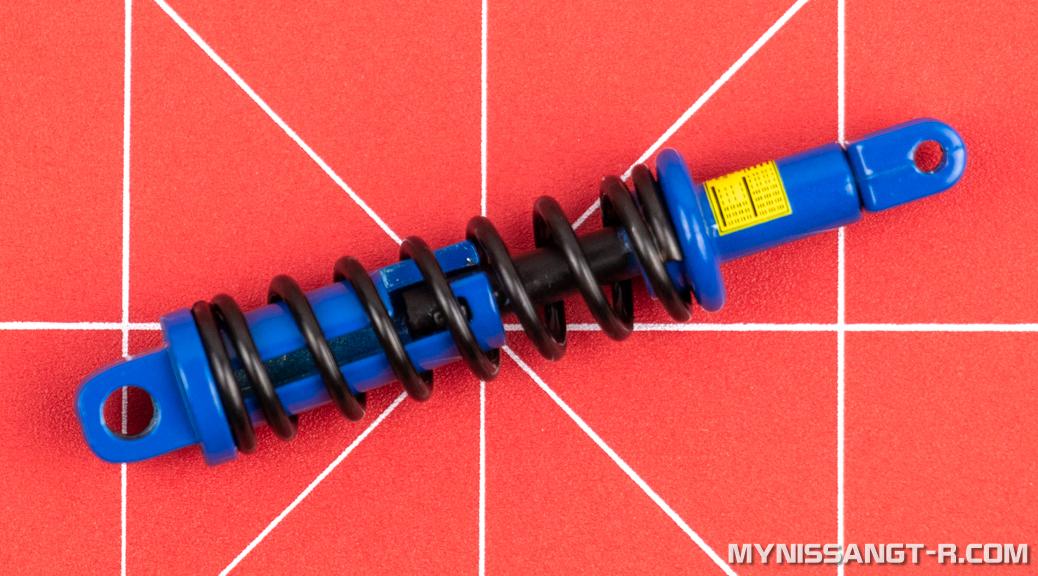 Slot the Upper Join into the Knuckle Base, as shown. Insert one (1) EM screw through the holes and secure it with a nut.

This screw/nut can be tightened all the way without affecting the movement: 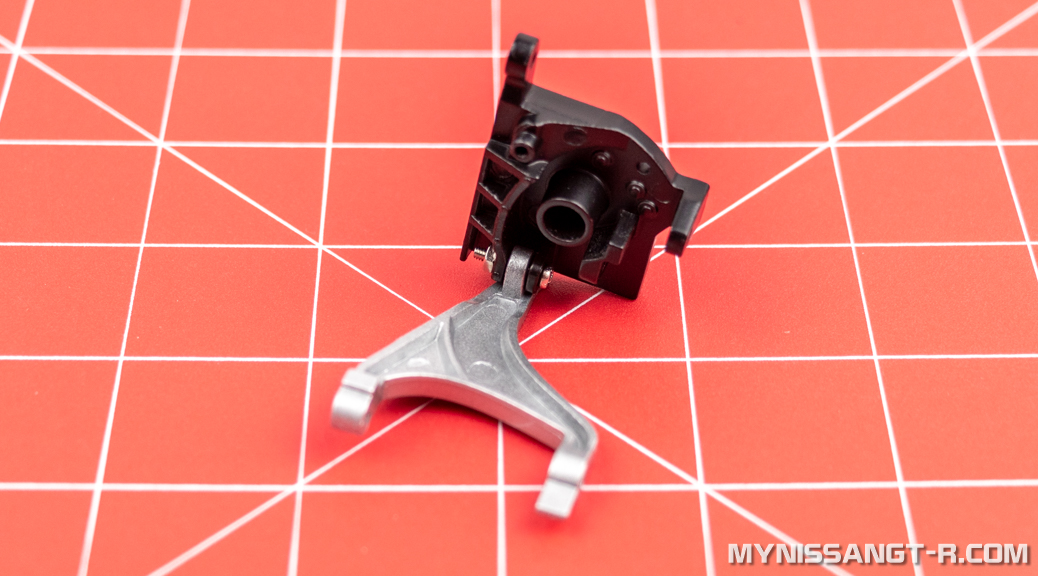 Slide the shock assembly from earlier into the Knuckle Base, as shown. Insert one (1) EM screw through the holes and secure it with a nut.

I don’t think it matters which way this shock attaches to the knuckle, but this is how the instructions show it: 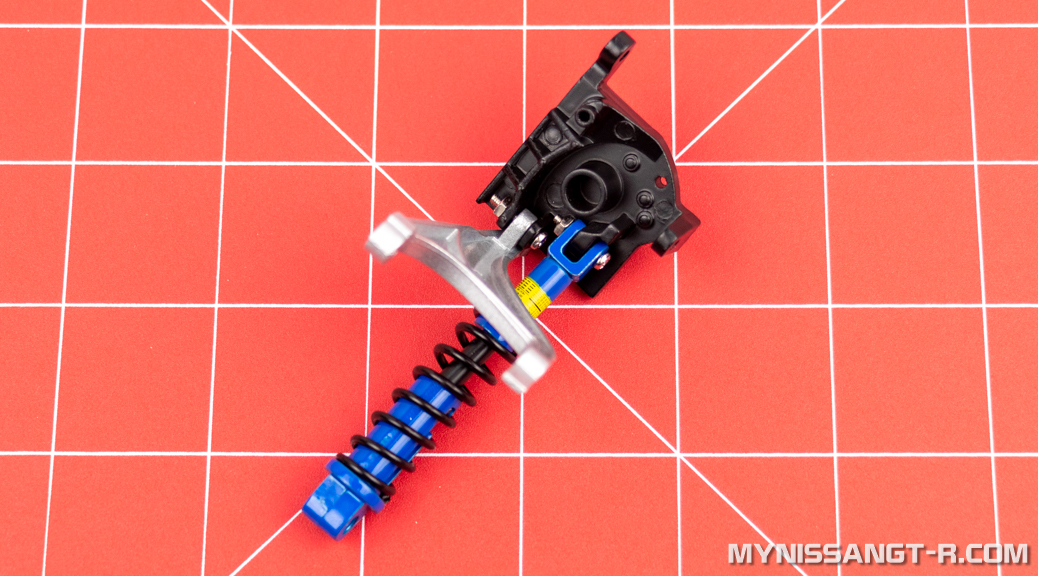 Slide the Lower Toe Strut Bar (long) into the Knuckle Base, as shown. Fasten with one (1) EM screw and nut.

Take care to install these the correct way. They have a slight bend to them and should angle away from the silver Upper Join: 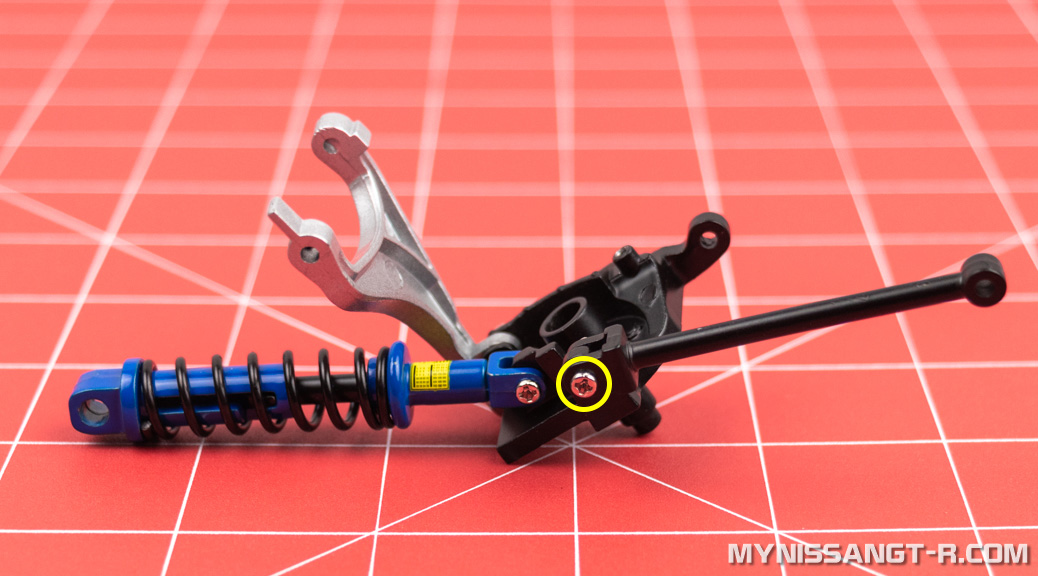 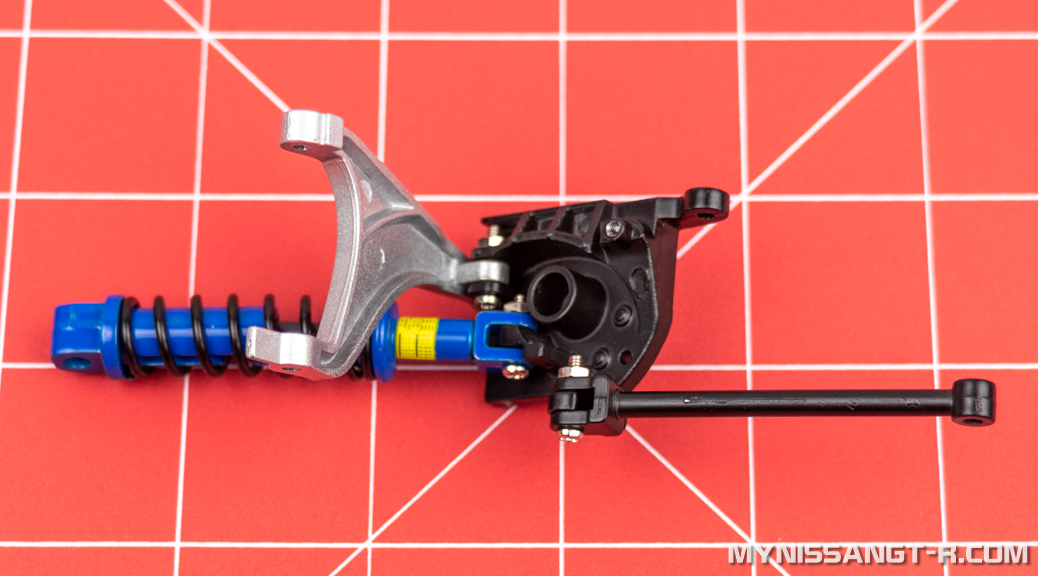 Then, slide the Lower Toe Strut Bar (short) into the Knuckle Base, as shown. Fasten with one (1) EM screw and nut: 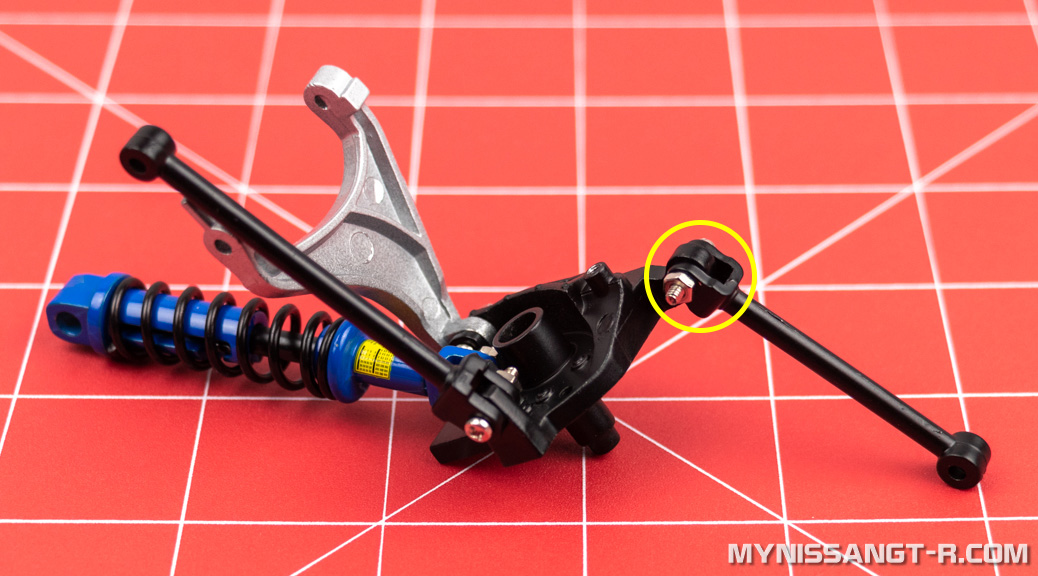 Make sure the two Strut Bars angle away from each other like this. If not, flip the Lower Toe Strut Bar (short) around: 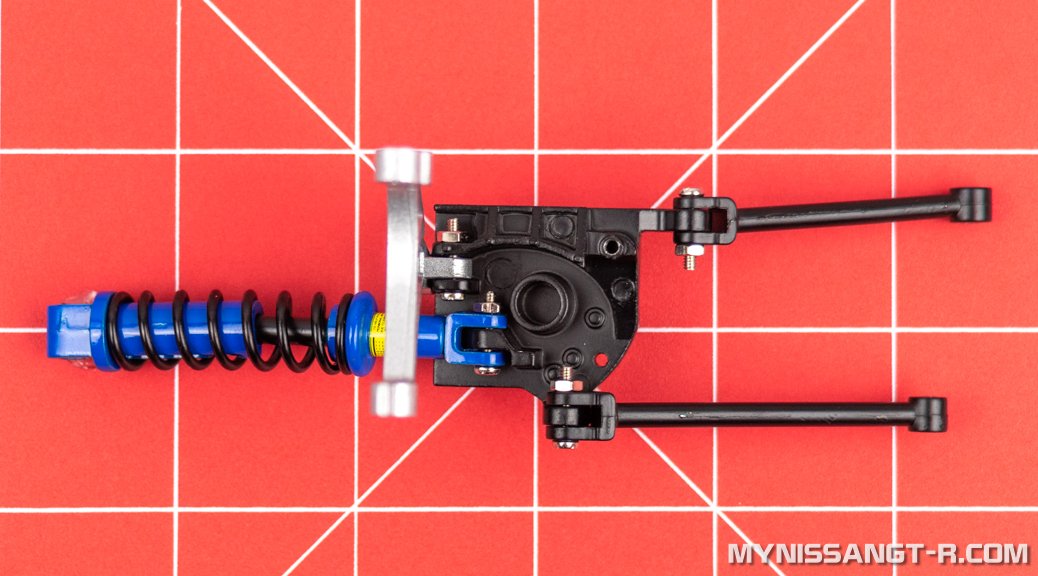 Place the Lower Sway Bar onto the Knuckle Base, as shown. Secure it with one (1) DM screw, but leave it a little loose.

Make sure this goes on the correct way (there is a tab that faces down) and the bend of the bar should be towards the silver Upper Join. This is also your friendly reminder to try using 3-in-One Oil on all screws going into metal: 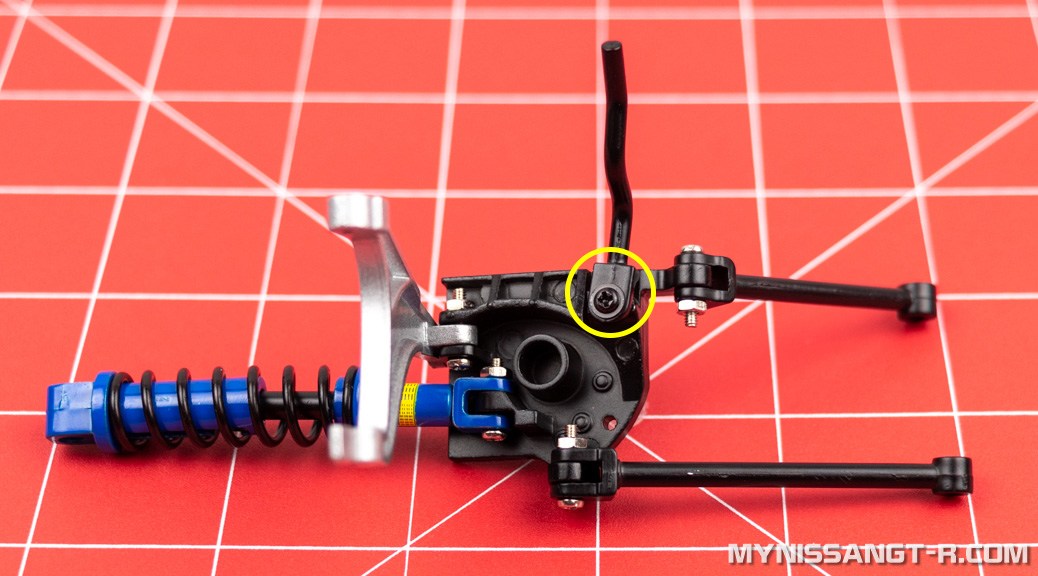 This pack is just a repeat of the rear right suspension, so it felt very familiar. But, this time we don’t have the wheel and Brake Caliper parts to attach (they will come later). Every single part in this pack is metal, which is great!