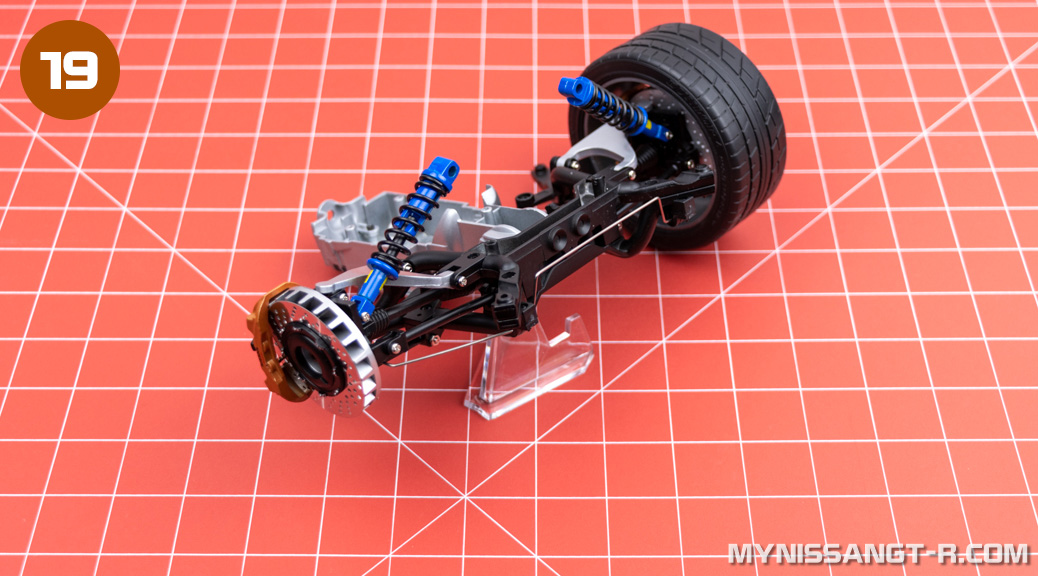 “In this [pack], you will fit together the parts of the Rear Left Brake Disc on your NISSAN GT-R (R35) model.”

This pack will be a near duplicate of Pack 03, where we built the first brake disc assembly. Keep on the lookout in this shipment’s box for a small loose plastic bag that is not part of this pack’s packaging. It contains four clear plastic Washers and a spare Wheel Cap: The cross-drilled holes in the Brake Disc Plate should follow the shape of the vanes underneath. If not, flip it over: Fit the two pegs of the Brake Disc Plate Hub into these two holes, as shown: Secure from the reverse side with two (2) BP screws.

Be careful screwing these in, they strip pretty easily: Retrieve the rear suspension assembly we last used in Pack 13. Secure the Brake Caliper to the existing Knuckle Base as shown, with two (2) BM screws.

Take care not to pinch the brake hose behind the caliper. This is also your friendly reminder to try using 3-in-One Oil on all screws going into metal: Eaglemoss does not mention it in the instructions, but the pictures in the magazine show the brake hose routed through the small hole in the frame here. We did this already on the other side: Fit two of the Washers over the center post of the Knuckle Base: Then, fit the Brake Disc assembly over the post, but inside the Brake Caliper, as shown:

This will remain a bit loose until we attach the wheel in the next pack: After a couple months of delay, I started to really miss building this model. Happily, we finally received another pack to complete. And, it was a quick and easy one with a repeat of assembling another brake disc.

As for the tiny bag with the Washers and the spare Wheel Cap that are not part of the original packaging: The original design of this GT-R model had a lot of wheel wobble. I definitely noticed it myself when installing the rear right wheel. Luckily, Eaglemoss has since begun including these small extra bits to help us minimize this wobble. The two remaining Washers and the spare Wheel Cap will be used to fix the installed right rear wheel in the next pack, so keep them nearby.

The plastic stand in the photo below is not part of the build; I just used it to prop up the assembly for the picture: