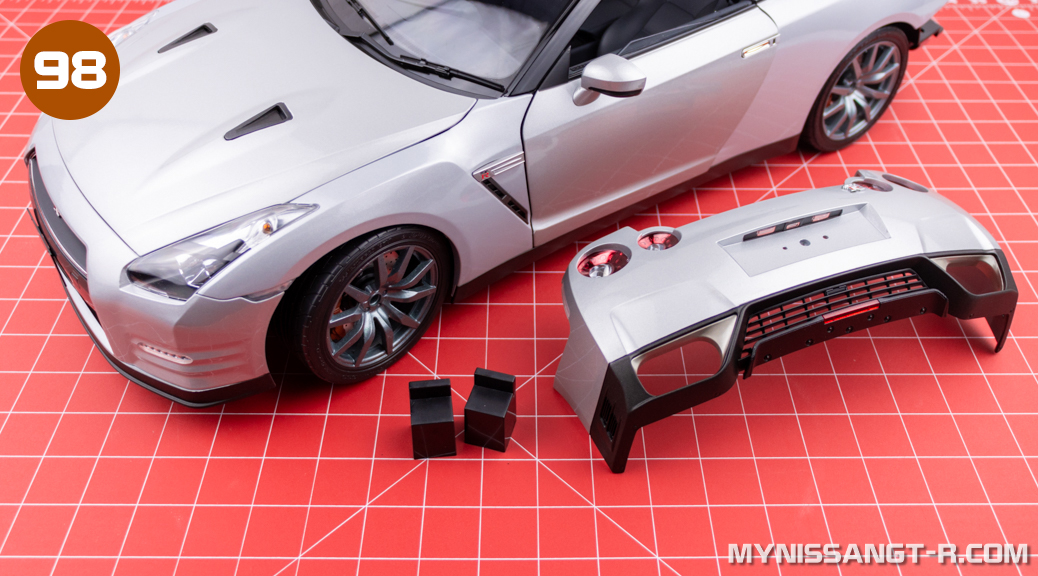 “Now you will assemble the Rear Lights and combine your model’s upper Car Body with its lower chassis.”

This is a monumental stage as we will finally be bringing the Body to the Chassis of our GT-R, sometimes called the ‘marriage’! Fit the Left Rear Light assembly we just built into this opposite left-side opening of the Rear Bumper from the inside as shown, and secure it into place with two (2) HM screws: Our Rear Bumper is now complete and nearly ready to be attached to the Body! Retrieve your Body assembly we last worked on in Pack 95 and carefully turn it upside down on a soft cloth. Retrieve your Front Fascia assembly from Pack 01 and fit it to the front end of the Body assembly, aligning the four screw holes as shown: Secure the Front Fascia to the Body with four (4) AM screws, two on each side as shown: With the Front Fascia now installed, the nose of our GT-R should look like this: To make this work, I found that I needed to re-route the two Chassis wiring plugs under the Dashboard out to the left side of the car, as shown: Connect the two-pin connectors for the Interior Light Switch, as shown: Connect the four-pin connectors for the Headlights together, as shown: Carefully fit the Body assembly completely down onto the Chassis assembly. Then, at the rear, connect the two-pin connectors for the Interior Light together, as shown.

I found the Body sits down on the Chassis much better if you keep both doors open while you are lowering it down: Make sure all wires are hidden and not pinched/trapped between any parts. The only wire that should be still exposed is the Brake Lights cable.

The wiring on the side of the car I tucked into the space under the Dashboard, and then I tucked the Interior Lights plugs and wiring completely into the space next to the trunk liner, as shown: At this point, the only exposed wiring should be our Brake Lights cable: When you are satisfied that the upper Car Body is tightly pressed against the lower Chassis (and all of the screw holes are aligned), turn the entire car upside down again on a soft cloth. Then, secure the two assemblies together with twelve (12) RM screws, as shown.

It does take some fiddling to get the Chassis to fit completely down inside the Body. If you find it is not seating all the way, check that the plugs and wiring on the side of the car are not caught between the two assemblies. I secured the Chassis to the Body from the back to the front. Don’t forget the screws hiding up inside the wheel wells: With that, the assembly steps in this pack are finished, and our GT-R is in one piece so the ‘marriage’ is complete! It was a bit rocky at times, but the ‘marriage’ of our NISSAN GT-R (R35) was successful and it looks amazing! We still need to attach the Rear Bumper, so keep it nearby for the next pack. Save the Front Support Blocks in case you want to demonstrate the steering action later on.